Most of us suspect that diets just don’t work. Despite the fact that every six months or so, a new diet comes along touting a new and amazing way to lose weight, there’s a good chance that for a large chunk of the population, it won’t be effective. As usual, it comes down to the individual’s “strength of will” or “mental ability” to constrain themselves and only eat particular foods, or particular quantities of foods.

I prefer a different approach.

Why not, instead of sitting there dreaming about what we could eat that we’re holding ourselves back from eating, we learn how to stack the deck in our favor? Why not set up the dominoes of our life so that we find ourselves eating what we should be eating, without having to drive ourselves with an iron fist? By the way, that’s totally possible.

The principles of systems thinking (and the specifics of the body), allow us to explore systemic changes that we can make, so that it doesn’t come down to “strength of will”—whatever that means.

We don’t have to pretend that somehow, whatever shape our body has at any given time is “who we are.” The body isn’t static or immutable in any possible sense of the word: it replaces all of its cells every 7 years. The only thing keeping the body’s shape from changing dramatically is what I call “historical and environmental momentum”—the pressures that our past and our environment places on it to conform to a certain shape—and our identity: our own self-assurances that this is who we are! (Which is a pressure in itself). If we change some of those variables, our physical shape will change accordingly. The trick is knowing which variables to change. In The Fifth Discipline, Peter Senge writes: “the harder you push on the system, the harder it pushes back.” If the system is pushing back, that doesn’t mean that we’re stuck; it just means that we have to find out how to work with the system.

The first and most important thing is that we understand systems want. And for that, we need to know why systems are even a thing in the first place. Scientists believe nowadays is that it is an essential property of matter to self-organize. These organizations are called “systems.” So, the foremost goal of any system is to exist. And for that it needs inputs of energy—enough energy so that all of its parts continue to be in motion. As long as they are in sufficient motion (but not too much motion), they’ll be organized, and the system will continue to exist.

By virtue of wanting to exist, we know exactly what it is that the system will protect above all other things: its inputs of energy. Food, oxygen, water. It takes such immense strength of will to fight the drive to eat (and the drive to drink and breathe even more so) because we are threatening the system’s opportunity to exist. The harder we push on the system, the harder it pushes back.

Because our strength of will is predicated on the existence of a body and a mind, we’ll never be able to beat it by going down that particular avenue. The last thing we want to do is to restrict its inputs; that’s the surest way to guarantee that we’ll fail.

Let’s state this as a premise:

The most powerful mechanisms of any system are those designed to maintain the continuity and predictability of its inputs.

We can’t fight these mechanisms without severely damaging the system, even if we win. So we have to do something else: we have to improve its “input security.” And how do we do that? High-fat diets have the right idea (although we don’t have to go by a high-fat diet’s every tenet to be successful).

When we eat foods such as walnuts, olive oil, avocado, coconut oil, and salmon (which are high in polyunsaturated fats), this triggers a hormone called leptin. Leptin increases our feelings of fullness and satiety, and regulates the levels of another hormone, called ghrelin. (The blue arrow with the minus “–” sign means that the presence of leptin reduces the presence of ghrelin): 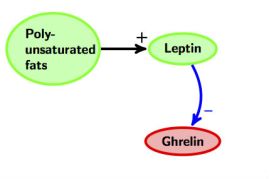 Ghrelin occurs when our stomach becomes emptied, so that our levels of hunger increase, and we become compelled to eat food. However, ghrelin compels us to eat any food. Don’t mistake this for a problem: we need more than just leptin-releasing foods to survive. But in a world where we’re surrounded by carbs and highly-processed foods, the foods that we’ll find ourselves reaching for are much less likely to be the kinds that produce leptin, simply because they either don’t have polyunsaturated fatty acids, or they’ve been processed to a point that those fatty acids are unrecognizable from a metabolic point of view.

When we constrain calories, ghrelin levels continue to increase, unmitigated, until the urge to eat becomes overpowering and we break our diet. We can’t rely on willpower because making us eat is a property of the system. When we challenge the integrity of this system, and it will always beat us. And when it does beat us, we overeat. Why? Because the system is trying to stabilize itself. But there’s an end to this process of stabilization: fatty deposits are the other source of leptin. The more fatty deposits, the more we’ll produce leptin, and once there is enough that levels of ghrelin wane, our hunger will also subside. On the model, I put “fatty deposits” on an outside loop to represent that this constitutes a much longer-term way of producing leptin (and of regulating ghrelin) than by simply going through the much more immediate solution of eating a higher percentage of polyunsaturated fatty acids. 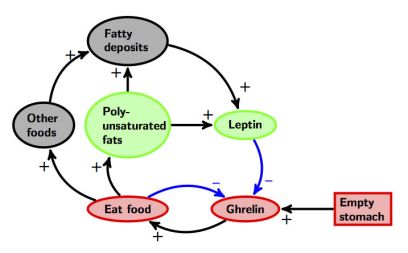 Thanks to this model, we can see the body’s fall-back solution, when no polyunsaturated fatty acids are available: increase the fatty deposits. Remember that the goal of the system is to maintain itself. If it doesn’t have the necessary fats in its diet, it’ll make sure that it has a larger amount of fats in the fuel tank. However, we’re back where we started; the “environmental momentum” of the foods we put around us has led us to the same place. The first solution is to increase the amount of polyunsaturated fatty acids in the diet. Leptin levels will begin to rise as soon as we eat them; they don’t need to enter our fat cells.

So how should we strategize our intake of foods high in polyunsaturated fatty acids? Simple. Just front-load them; eat them in the morning. Because we only eat during the day, if we eat these kinds of foods in the morning, leptin levels will be higher overall during more of that time, meaning that our feelings of satiety will be higher for more meals rather than fewer. And even if we eat at night, regulating our levels of leptin with the correct morning foods is a place to start, given how leptin interacts with our circadian rhythm. This said, it doesn’t take a lot of these fats to increase levels of leptin: if you don’t have a chance to prepare meals during the day or don’t have regular access to these sorts of foods, a tablespoon of coconut oil should be enough to hold you up throughout your day. The point here isn’t to make breakfast your only meal, or for you to think that leptin is somehow magical. It’s a hormone like any other. But it constitutes a powerful way to intervene in the system.

Increasing levels of leptin is only like stacking the deck. There are still ways to lose, if we don’t consider other potential variables. High leptin will only make us less likely to eat; we should still work to consciously reduce our carbohydrate intake. The point of increasing leptin is to make that a simpler and less stressful task. If we aren’t groaning with hunger, it’s much easier to not reach for empty carbs. As with all systems, however, the answer just isn’t this simple. As I like to say, we live in the biopsychosocial system. There are myriad other systems encroaching on the very basic model of the biological system I just laid out. Some of us are naturally leptin resistant. (There are answers to that). Some of us have very stressful jobs, so we tend to eat more. (There are answers to that too).

So it isn’t isn’t just eating certain foods that will do the trick. Those foods actually have to create an increase leptin levels, to reduce levels of ghrelin. If you are too stressed (and therefore producing too much ghrelin), or you aren’t metabolizing fats properly, or you are resistant to leptin, you will find yourself eating more carbs. We need to find solutions that are more removed and more fundamental, and begin solving the problem in the same way that you would approach a puzzle: piece by piece. That said, many of the pieces of this puzzle are very directly related to athletic development, which makes it highly likely that I’ll be discussing them in the future.

Our habits may also detract from all of this. We may just miss eating the foods that we want. That’s fine. If we want to lose weight, we will need to phase these habits out of our life. But it’s unfair to say “just go and get on with it,” or give you that kind of bullshit “you should do this” advice, without telling you how to do it. Increasing the levels of leptin offers you a systemic advantage, such that by reducing stress on the system, it becomes easier to make a series of other changes. In other words, increasing the levels of leptin may just be the first (or one of the first) in a long line of necessary interventions. There are other interventions to make: social ones, psychological ones, physical ones. They’re all important, but this one, because of its effects, seems like a good place to start.

You can take that almost literally: in Donella Meadows’ list of leverage points into a system, changing the foods you eat and increasing levels of leptin are examples of #12 and #11, respectively. (In other words, they are the simplest to make but also the least effective).

The trick is to use systems thinking so that we’re not at the mercy of people that say one thing or claim the other. Remember, the system isn’t dumb. There’s a really good reason it’s doing what it’s doing. If you can figure out the reason, you can find an answer which doesn’t ask you to push on the system. And the best way to figure out the reason is to keep in mind that the body isn’t special—it’s an economy like any other. As long as you figure out what keeps this economy going without madly grasping at every resource it sees, your solutions will do just fine.