When I read articles about running, I often come across phrases like “no single foot-strike pattern is representative of the entire running population.” True enough, but it doesn’t really help runners: all it does is describe the present state of affairs of the running population.

The problem that I see with this is that many people—many scientists, even—take this descriptive observation about the world and turn it into a prescriptive one. Within their statement is a hidden interpretation (shown in italics):

Why is this problematic? Let me give you another example—one that we’re all comfortable with.

Let’s suppose that we did the very same research, only about how people lift heavy objects. Statistically, our findings would be similar to running; as researchers, we’d be prompted to say: “no single lifting pattern is representative of the entire human population.” In other words, we’d make our analysis, and see that some people lift objects by bending at the waist, and others lift objects by bending at the hips. 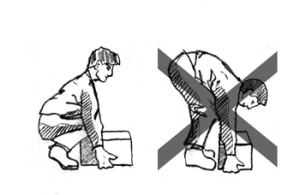 The difference, of course, between running and lifting heavy objects is that we have a clinical standard for lifting. We know that bending from the waist is a bad idea for virtually any human out there. There are only three options for lifting objects, and when you really think about it, there’s only one:

But we should keep in mind that the reason it seems ridiculous is because we have a clinical standard for lifting heavy objects, namely, to minimize trunk flexion throughout the lifting action.

This, of course, doesn’t mean that midfoot/forefoot striking is better than rearfoot-striking (although it certainly sets me up to make that argument).  What it does mean is that descriptive observations about a population’s habits tell us very little about what that population should be doing. They only tell us much about what it is doing. And what we do know is that given the stratospheric injury rates for runners, the running population is doing something wrong.

We need a clinical standard for running. In order to get one, the first step is to stop interpreting descriptive statements as if they were prescriptive ones.

UPDATE: Here are a couple of good articles on how foot-strike could be a function of running speed. This all adds to the question: what should the clinical standard be—which part of our foot lands first? Probably not. But we need a standard. There are a few ideas out there, but I’ll leave that for another post.