The endurance running hypothesis is the idea that humans evolved primarily as endurance runners. The argument goes that the human physique evolved and took its shape and function from the primary adaptive pressure of persistence hunting—that of chasing down our prey until its body shuts down.

However, this hypothesis is not without its detractors. A significant amount of scientists provide an array of counterevidence to the endurance running hypothesis. (And the debate continues.)

However, another article in the Journal of Comparative Human Biology finds that the gluteus maximus grows much more in high-force sports (weightlifting) and high-impact sports (such as soccer), than it does in endurance running. In fact, they also show that the butt muscle in endurance runners is no larger than in the non-athlete population.

What I disagree with is their conclusion, which is paraphrased in the “What does this mean?” section in the image below:

“The human gluteus maximus likely did NOT evolve through endurance running, but through varied explosive and forceful activities.” 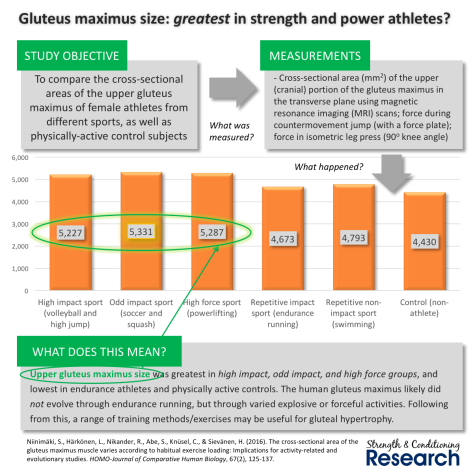 My disagreements with the article (and the image) are primarily about how and why we interpret the science to mean a certain thing.

At first blush, the fact that endurance running doesn’t enlarge the gluteus maximus as much as other sports seems to detract from the idea that the muscle takes its shape from endurance running. But I think it actually adds to it.

By my analysis, these findings show that the basic, untrained shape and size of the gluteus maximus—it’s “factory specifications,” if you will—assume that it’s going to do the amounts of cutting, jumping, weightlifting, and sprinting that a habitual endurance runner might need to do. But it requires aftermarket modification to meet the (literally) outsize power and stability requirements of soccer or weightlifting.

Let’s say that a muscle evolved under a particular adaptive pressure. This means that its shape and size literally evolved to do that thing. If you take a muscle that usually doesn’t do a thing for which it evolved to do, and you ask it to do that thing, you are asking it to do something that it has prepared to do for millions of years of evolution.

In order to fit a function that it has been designed to do, the changes in shape and size that the muscle should have to undergo should be smaller, not larger. You would expect a muscle to change far more if you ask it to do something that is less aligned with its evolutionary job description.

Let’s illustrate this by looking at the arm and hand.

Now let’s take a snapshot of the people who take this unique human ability to its very pinnacle: string musicians, graphic artists, etc. Their livelihood depends on the degree to which they can explore the potential of one of the major evolutionary functions of the human hand.

Compare the forearm muscles of a violinist or painter with that of a weightlifter. The weightlifter’s arms, hands, and shoulders will be much larger and more powerful. (I trust I need not cite a scientific, randomly-controlled study on the matter.) Why? Quite simple: weightlifters engage in activities that develop the body to phenomenal proportions.

But if we go by the conclusions of the article, the fact that the arm and hand get bigger through weightlifting would mean that it didn’t evolve for the kind of fine motor control that you produce in the arts. (Or that lifting heavy objects is its primary evolutionary role). A particularly ambitious version of this argument would be to suggest that one of the core functions of opposition is to become better able to lift heavy objects. But all these suppositions break down when you realize that our primate cousins were not only quite able to grasp branches and use them ably, but that opposition emerges at the same time that hominid arms were becoming smaller (and less powerful), not larger (and more powerful).

Of course, the human hand (and upper extremity in general) still needs to be able to grow and develop in order to be able to lift heavy objects—and can indeed grow to a huge degree to exhibit that function. But its core evolutionary function is to produce the unparalleled dexterity of the human being.

We should think the same of the gluteus maximus.

But what we can say is that the fact that the gluteus maximus gets bigger through a particular stimulus has no bearing on its core evolutionary role, (or on the evolutionary story of the organism as a whole).

8 thoughts on “In defense of the endurance running hypothesis, part 1: how we think about evolution.”